Michael and Sheila our two fearless club leaders came up with a wonderful notion
Have a bowls tour to Eastbourne in September 18 and soon put the wheels into motion.
They e-mailed our members to get a feed back
If we still used a postman, he would need a big sack

Michael and Sheila were leaders of the pack with Harrison so keen to go
Mick Moorcroft and Joan were soon signing up and Mick B was also in tow.
Dave Bartram and Gillian, they also came too
With Dave’s brother Alan and his lady wife Sue

Bob Turner and Rosemary from Farnborough Gate
With Ann and with Mary, now these two were great
The Blythe’s Andy and Sharon from Underwood
And Charles and Joyce said that they also would

Social members Anne Buddle & Cheree we met,
And Barbara Sharman, how could we forget
Brenda, Edith and Cindy were there for the fun
Geoff Ringrose, well, he came just for the sun.

Arthur and Pam the Pages by name
Are the Crazy Golf winners and milking the fame.
Pauline with Paul Sainsbury both joined the club
Paul was just brilliant at night in the pub.

Bob Savory with Judy and Alec
Three stars from the bowling brigade
It was great that Bob, Judy and me
Were the only winners at The Parade

We had our first friendly ten minutes away
Yes, Bob, Judy and me won Hip Hip Hooray
The Langham was brilliant with breakfast and dinner
Michael and Sheila, you sure picked a winner.

Harrison bought some new woods
The colour was a very bright yellow
He lent them to Ringrose to try them
He wrong biased, the silly old fellow.

It was really a fabulous week
The bowls and the sun shone bright
Not forgetting some great laughs, we had
With the gang in the bar at night

So, Thank you to Michael and Sheila
For all the hard work you have done
A little bird tells me it may happen again
In 2020 I’m told if we all survive it by then. 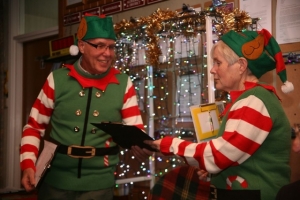